With respect Prime Minister Morrison it was AstraZeneca that killed them, not COVID.

The power of compassion has no bounds.

Watching Rainbow Lorikeets tucking into breakfast, trapezing with a hop swing and fly from branchling to branchling high in the Ironbark tree, I am glad they needn’t be afraid of the COVID delta variant. COVID is not their pandemic. It’s a human thing. Their table talk is lively and engaged. While I watch and listen through the window my heart sings. Too soon they’ve enjoyed their fill and flown off and I am lonely.

The temperature has dropped. Ezekiel Ironbark’s eye is sky blue then a creamy cumulous. Daylight dissolves his profile into leaves and branches. (More on Ezekiel later.)

Yesterday was Thursday. I’ll not open the door until Thursday comes again when my online shopping is brought to the door by one of Coles Supermarket truck drivers —may the Force be with them— who save my sorry ass every week —may guardian angels save them from COVID.

Reading Olivia Caisley’s article, “Astra blitz: Scott Morrison says get the Covid-19 vaccine now” in The Australian, I did a double take at:

Mr Morrison’s pitch to people under 60 came as the TGA announced a Tasmanian man and a Victorian woman in their 40s had died from the rare clotting disorder linked to the AstraZeneca vaccine.

Mr Morrison said the deaths were an example of the “terrible impact that pandemics have”.

No. With respect Prime Minister Morrison and with sadness for the deceased and their loved ones whose grief you trivialise, it was the AstraZeneca vaccine that killed them, not the pandemic.

It is duplicitous to blame COVID for these tragedies.

And what have we become that we no longer dignify the dead when it conflicts with our agenda.

Do we genuinely believe, as we are being told by our leaders, biting the bullet and accepting the AstraZeneca vaccine in the absence of a better choice is serving, not merely our own best interest, but serving our nation?

That our nation is at war with COVID-19 as we are being told and which the appointment of ADF Lieutenant General John Frewen as Coordinator General of Australia’s COVID-19 Taskforce seems to confirm?

If that’s a yes, why is our nation not applauding the sacrifices made by those dead and injured by AstraZeneca on our behalf?

If that is too much to expect from a spooked nation at war, the very least we might rise to is publicly offering our gratitude and condolences to the families of the deceased. And stop dismissing lives lost and injuries sustained, incessantly playing down the casualties of AstraZeneca and quoting statistical analyses of the percentage likely to become acceptable collateral damage.

Facts do not cease because they are ignored.

Now I begin to understand the source of my growing mistrust of governments, federal and state, their advisors, and mainstream media regurgitating every word uttered without investigation— Of scapegoating readers whose comments are increasingly vitriolic. Comments in The Australian that are now reading like the contemptuous voices of Facebook afficionados that TA readers once were fond of denigrating. 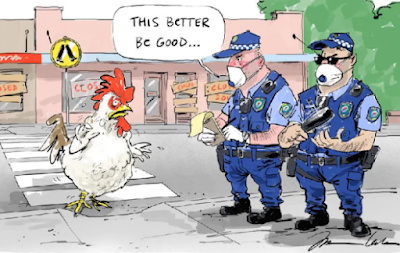 We, the elderly AstraZeneca-fearful strangers who exchange a snatched second or two of comfort and understanding encountered at the florist’s, outside the pharmacy, in the tram— We have no voice but our own whispers.

Prime Minister Morrison knows he has nothing to say to us—how could he not. He has already decided not to allow us the vaccine of our choice like everyone else. Too bad about our fearful old age co-morbidities.

It was only in the Western world that old people were viewed with indulgence or contemptuous sympathy. In other cultures, age was respected as the period of enlightened wisdom.

"If Pfizer is quick fix, give people what they want” Natasha Robinson writes (The Australian, 23/7/2021) addressing the Delta variant troubling New South Wales. "While it’s important to vaccinate younger workers who cannot stay home, the most important thing is protecting the elderly from death and severe disease."

“It would be game-changer. There is no hesitancy about vaccination in this area. There is refusal against AstraZeneca...The only thing we can do is to give them the vaccine that they want."

In “Battlers want to avoid the virus, not live with it” (The Australian, 24/7/2021) writes Angela Shanahan:

Meanwhile the federal opposition is making hay over the vaccine rollout, but it is no good trying to blame the federal government for the current situation because, aside from the constantly changing advice about who can have AstraZeneca, many people in the categories that can have it don’t want it, especially women 60 and older. That is an individual decision, not a decision of the federal government. Nor is it irrational...There have been 83 hospitalisations and six deaths from AstraZeneca, and it is not as effective against the Delta variant as the Pfizer vaccine.

The Prime Minister’s frustration at this is palpable, but he is right to say the challenge today is different from last year. Consequently, we may need to change our strategies. One part of that strategy is to modify the age profile of who should be vaccinated.

Will there come a day when old people will also be given the freedom to choose which vaccine they want injected into their vulnerable bodies?

Not this year. Election or no election.

"For your own good” is a persuasive argument that will eventually make man agree to his own destruction.