Lest We Forget—Melbourne State of Victoria Australia September 2021

Two photographs appearing in The Australian newspaper this morning, Saturday 25th September, tell the story of the current State of Victoria.

How could we have known so many Melburnians were courageous enough to defy the longest enforced COVID lockdown in the world in support of construction workers whose democratic freedoms the Labor Government Premier Daniel Andrews decided to revoke?

That’s Premier Daniel Andrews who signed Victoria up to China’s Belt and Road Initiative. And Labor, his Party that once long ago championed the rights of working people.

Did we realize how premeditatively ready the Premier was and the steps he took prior to actually turning our once most liveable city into a virtual police state with himself its dictator?

An elderly woman was out there. They knocked her to the ground, stood over her and pepper-sprayed her in the face.

You have to respect cartoonists who tell truth like it is in all its true colours. 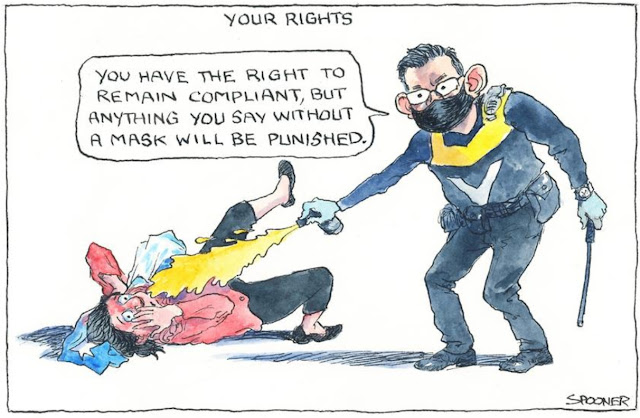 For it is true: Thus Spake Our Hallowed Masked Premier with his Force behind him.

And I only watched it on telly.

This virus is unlike any other in that it was the subject of manipulation inside a laboratory at the time of it’s escape. The politically and economically compromised World Health Organisation has not demanded access to the research, so the world, not privy to the research data, can not know whether experimental technology may already have been embedded within the new virus.

The truth continues to be a dirty little secret of the Chinese government, guarded, perhaps, even from the USA interests which jointly funded the research at Wuhan. That the nature of the research was of military value to the superpowers has not been denied.

Following Australia’s call, a faux investigation was subsequently conducted. What was that about?

My Australian federal and state governments are not behaving rationally, let alone decisively. What are they not telling us about the capabilities of this manmade virus? Are they afraid, perhaps, that we will panic if they tell us the truth? Why are they fighting amongst themselves at such a fearful time in our nation’s history? Our nation is being reduced to shards. Democracy is on hold. Victoria resembles a police state. A reality many police themselves don’t want to engage in. They have no choice but to follow orders.

I can’t trust my Prime Minister any more. I voted for him but now I hardly recognise him.

So, when I can no longer trust the Prime Minister or his Minister for Health, Greg Hunt, how can I overcome my terror of participating in the AstraZeneca trials in order to lessen the impact of the Delta variant when it reaches me? This terror is as intensely palpable as that of the shapeshifting manmade COVID-19 virus itself?

What is the real reason Prime Minister Morrison is refusing to announce when, if ever, he will allow old people to choose the alternative mRNA vaccine, as it becomes available, just as he allows citizens under 59 years to so choose?

Am I the only old woman, self-isolating whether lockdown is mandated or not, alienated from human society, unable to be with family overseas —possibly forever judging from the prevailing mood of corporate influencers— frightened, struggling against paranoia and now wondering if her determination to keep going will sustain her or betray her?

I don’t think so.

Former President of USA, Ronald Reagan’s famous words ring true to me like never before: “The nine most terrifying words in the English language are “I’m from the government and I’m here to help.”

On Friday the 9th of July, when I visited my federal member Treasurer Minister Frydenberg’s Melbourne office to ask when, if ever, the Prime Minister will allow me to have the Pfizer vaccine, I was invited by his staffer to write my name and email address on a piece of paper. I was told I would be contacted when the Prime Minister announced that decision. Five and a half weeks later I am still waiting for the promised information.

Tell us the truth Prime Minister. All of it. Only that will silence the divisive statistics-wittering mainstream media from opinionizing and speculating and herding people like me toward social media like lost sheep in search of green grass.

This morning, another vanishing present almost past, is yet. I made it here in the nick of time. Thank you Lord, Whoever You Are.

At some point, even if it is on our deathbed, a great inner vastness opens up from within awareness. Labels fail to pin it down, for there is neither the subject nor the object that English syntax demands. Contemplative practice is to cultivate what is beyond subject and object dualism. This is a great inner liberation, the transfer —to use a Pauline metaphor— to the Kingdom of His Beloved Son. But none of this shows up on a CCTV camera.

Now as I watch weeping the unspeakable suffering being endured around our world at the hands of narcissistic consumers and people who love to hate, I think, all I can do, here in my foxhole, is learn to pray for all our victims.

Public Housing in Victoria is no place for old women.

It’s always been as bad as this for me.

I’d quoted Hyacinth’s “It’s never been as bad as this” in my October 2019 submission to Victoria Parliament which never reached the floor of the hallowed house. I didn’t know when I researched and wrote it that a nobody old woman Houso can’t make such a thing unless it’s in response to a current enquiry. It had been my last ditch hope for wellbeing and a little peaceful enjoyment of the last years of my life.

Even before our Housing Services Officer gathered up her tools of trade from her desk at the Box Hill Housing office and set up her workstation at home, she was not inclined to respond to tenant’s emails or keep her word whenever she said “I’ll look into it and get back to you”. It remains a mystery as to what the Department of Families Fairness and Housing HSOs do now they’re working from home. Have Zoom meetings with each other I suppose.

The first day I rounded the corner from the lift, a bag of possessions weighing heavy in each hand, Hyacinth and Theresa were standing out there on the walkway outside Hyacinth’s unit gawping at me. As I walked toward them neither moved a muscle. It was a weird few moments. This was definitely not a welcome to the neighbourhood contingent. I put my bags down and fished for the key to my new accommodation on a Melbourne government housing estate. The spellbound old women continued to stare from a few feet away. I was about to become Hyacinth’s new next door neighbour.

“Hullo,” I said, wanting to redeem the three of us from what was, from where I was standing, a woefully antisocial encounter.

“Hullo,” one of them responded grudgingly, like I was a piece of talking dog shit rapidly hardening on the soles of their old lady slippers. Theresa, Hyacinth’s old mate and neighbour on her other side, must have seen me coming up the path from her perch behind the bedroom curtains and alerted her bestie by knocking on their adjoining wall.

I escaped inside, closing the metal security screen and wooden door behind me as I’ve been doing ever since. In two months time it will be eight years since that day, third of October, 2013. In hindsight, I ought to have heeded my instinct, turned tail and walked off the East Hawthorn public housing estate, put my belongings into storage and set up camp under a bridge while I searched for a warmer community clime. This Victoria Government institution is no place for old women. 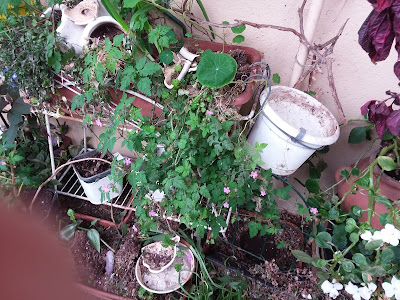 Over the Houso years, my garden was all that was good and now it’s gone. Hashem from upstairs destroyed it in a psychotic frenzy shortly before midnight on the 26th of July while I sat shivering on the edge my bed in the dark, clutching my cell phone and thinking if I hear him actually break the window I’ll call 000. 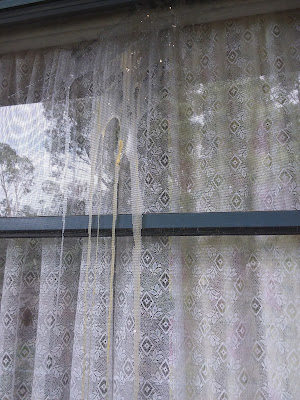 When he came down ten nights later on the 5th of August he finished the job, hurling an egg at my window.

I have been unable to convince Hashem that I am not making the terrible noises tormenting him inside his head. At night I hear him becoming agitated above my ceiling. Opening and closing his door. Tapping. Knocking. Thumping. Then startling me witless again, banging on my door on his way downstairs and off out into the night.

Camberwell police told me Hashem’s behaviour comes under the category of “generally annoying” which is “not criminal” and therefore not their problem. It’s up to the Housing. Such a nice policeman.

Apparently I can make an application for a Personal Safety Order. I think maybe you do that through the Magistrate’s Court. In the middle of Victoria’s sixth COVID lockdown: Who’s afraid of the Delta variant. Police have got their hands full manning the blockades at the New South Wales border and rounding up the unmasked fearless who rioted on lockdown night last Thursday the 6th of August.

“Your police station is Boroondara,” the nice policeman said then. “Not Camberwell.” I thought I detected an unspoken “Anyway” prefacing his final words.

Writing helps. Hashem was hammering on my door again last night. I’ve been sitting up in bed in the dark writing this on my tablet. Just after three this morning I wondered if the noise I heard was someone falling out of bed. Not Hashem. Wherever he is, upstairs or in the park, may he be peacefully sleeping by now, insha’Allah.

I am so very angry with the Department of Families, Fairness and Housing for merely transferring Hashem from his last tenancy because of his disruptive behaviour. For not acknowledging his need for professional support, medical and advocational. For all his psychotic rage, prowling the park at night and lurking in the foyer, he is not a bad man.

It’s almost four o’clock in the morning. I’m dead woman walking, I think. I’ll make a Milo with a squeeze from the tube of sweetened condensed milk and read a chapter or two of Greg Sheridan’s new book on my Kindle app I think. In the dark—

Names changed out of respect for the living and the dead.